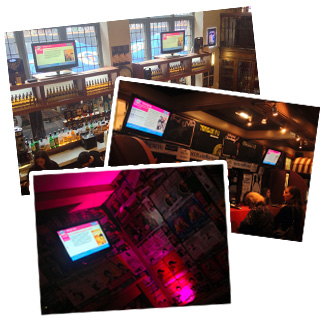 Using a network of Raspberry Pi devices and some custom scripting I developed a simple but powerful public information display system for one of the "Big Five" venues at the Edinburgh International Fringe, which has also since been adapted for a number of other applications.

The system is based entirely on open source software such as jQuery, Node.js, PHP, MySQL and Redis and uses a Linux host computer and display nodes.

The pi provides a powerful platform for digital signage at a hardware cost of under £30 per display - far lower than most competing commercial platforms.

A requirement of the Fringe installation is that displays were kept in sync when showing the same slide, this is essential as some rooms had more than one display. This wasn't supported by any other open source information display or digital signage solution.

As a performance venue, the digital signage shows timetable and availability information for upcoming performances - this is updated in realtime from the red61 ticketing and box office systems via their HTTP API.

The entire network of displays are managed centrally via a web-based interface, allowing various teams such as press and marketing, box office and venue management to control individual displays and the system overall, as well as presenting static slides on individual screens to suit the changing requirements of the venue.

Uniquely, this solution allows video and computer-generated content to be displayed together on the Pi display nodes as well as displaying live streaming video.

This is an example of the type of bespoke services I build, when nothing off the shelf is quite right for the purpose, if you need something like this for your own application, please get in touch.